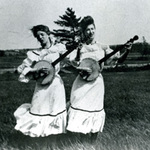 Download P7913: Hunter carrying deer over his shoulder through snowy woods. George and Hazen did not carry their deer out of the woods this way. Instead, they would have cut it into smaller pieces and put it in pack baskets. (299 KB)

George MacArthur's song, "The Wabassus Cannonball," is a musical parody of the well-known American folk song "The Wabash Cannonball." The original song is about a fictional train and MacArthur's tune tells the story of how he and a friend, fellow guide Hazen Bagley, outsmarted two wardens and a judge to avoid a conviction for poaching.

George MacArthur’s song, “The Wabassus Cannonball,“ is a musical parody of the well-known American folk song “The Wabash Cannonball.” The original song is about a fictional train and MacArthur’s tune tells the story of how he and a friend, fellow guide Hazen Bagley, outsmarted two wardens and a judge to avoid a conviction for poaching. It is one of a relatively rare breed of song from the Northeastern woods tradition about poaching (or even about hunting legally, for that matter), though hunting and fishing appear as ancillary details in other songs such as “The Bull Moose Song” and “The Dungarvon Whooper.”

P7913: Hunter carrying deer over his shoulder through snowy woods. George and Hazen did not carry their deer out of the woods this way. Instead, they would have cut it into smaller pieces and put it in pack baskets.

The details of the song do more than just tell the story, they also provide a small window into the history of Grand Lake Stream. This is not to suggest that the history of GLS is defined by poaching, but the details surrounding the incident cover many aspects of the region’s history as a world-renowned sportsman’s paradise. The basic outline of the story behind the song goes something like this: In the winter of 1939, MacArthur and Bagley were making railroad ties at a lumbercamp on Wabassus Lake. The name of the lake should be pronounced “Wah-baahs-us” as it is spelled, but local residents pronounce it “Wah-bawsh.” While working in the woods, they were also constantly looking out for bobcat to hunt, though it is not clear from MacArthur’s telling of the tale if that was legal to begin with! One morning after a snowfall they finally spotted a set of tracks and set out with Hazen’s dog on the trail of a bobcat. They eventually lost the trail of the cat, but on Third Machias Lake (which is a two to three mile hike depending exactly where they started and stopped) crossed paths with a buck. Despite being out of season, MacArthur shot the deer and sure enough two wardens soon found the remains. They followed the tracks of the poachers and the dog back to the camp and cited MacArthur, Bagley, and the camp’s owner (named Belden in the song – a $300 fine for him) for poaching. Ultimately, however, MacArthur and Bagley gamed the system with a series of self-professed lies and avoided all penalties. The song does not get into the details of these lies, but there were three basic tales involved. First, the wardens actually veered off the trail left by MacArthur and Bagley and returned to it later without retracing their footsteps. It was easily identifiable by the dog’s tracks, but that was not solid enough for the court. Second, Bagley added some reasonable doubt with his assertion that the deer hair found in the cooking pot could have been dog hair. And finally, MacArthur produced a receipt for a purchase of meat from local store owner Paul Hoar, a legend in his own right, that was never actually made.

Two other notes may help explain the events described in the song. First, the song notes that MacArthur was told to take his sleeper ax and go make ties. A “sleeper” is a horizontal timber that provides underlying support such as a floor joist or, in this case, a railroad tie. A sleeper ax is thus a special type of ax used to make sleepers. These axes were designed to do all the work of cutting down a tree and shaping it with one ax. Sleeper axes were smaller than a felling ax, but a similar weight and with a beveled edge like a felling ax. Second, MacArthur and Bagley were most likely making railroad ties for the woodland locomotives that were used to haul logs to landings for a drive. It is also possible, though far less likely, that they were making railroad ties for passenger or freight trains that ran in the area.

1. A-listen to the jingle, the rumble and the roar, You could hear the ice a-bucklin’ up and down old Wabassus shore; When I arrived at Wabassus Lake it was early in the Fall, And Belden’s crew was glad to meet the Wabassus Cannonball.

2. I asked Belden for a job, he filled me with surprise, When he said, “Go take your sleeper ax and start in making ties.” There was about a week and a half the sun didn’t shine at all, Because the air was filled so full of chips by the Wabassus Cannonball.

3. Then I went over to old Third Lake to have a little cheer, I headed up to Slaughter Point to try and shoot a deer; The old buck came down Slaughter Point and he had no horns at all, His face was filled with buckshot by the Wabassus Cannonball.

4. The wardens came into our camp, they thought they had us beat, For cooking in an iron pot they found a little meat; And then they hauled us down to court but they had no case at all, And the both of them were beat to Hell by the Wabassus Cannonball.