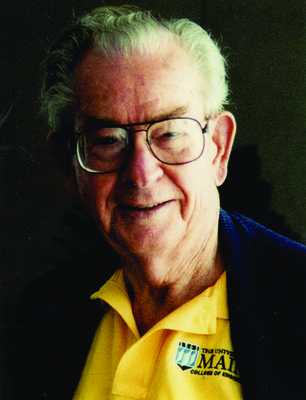 E. Nobles Lowe was born in Minturn, Arkansas October 4, 1912, the son of James and Lula Ether Lowe. He grew up in Louisiana and at the age of 15, after graduating high school, he attended Arkansas University where he received an LL.B. (Bachelor of Laws) in 1934 following which, he was admitted to the Arkansas Bar.

After only a few months as a lawyer for the Bond Refunding Board in Little Rock, Lowe left to become managing attorney for the world 's largest public utility holding company located in New York City, Reid & Priest. He later became partner at this same company. In 1943, he began a 34-year-long career with Westvaco Corporation, then West Virginia Pulp and Paper Company, as General Counsel. He also served as Public Relations Director and Government Affairs Officer. He later filled the roles of Secretary and Vice President.

Following Lowe’s retirement from Westvaco in 1977, he became a partner in the Boston firm of Gadsby & Hannah, opening the firm’s New York office. The following year he helped form the Lowe & Knapp law firm. In 1985, Lowe moved to Carmel, New York as a sole practitioner.

Lowe was the first recipient of The University of Maine's Pulp & Paper Foundation Distinguished Service Award. He died at the age of 103 on December 1, 2015 following a brief illness.