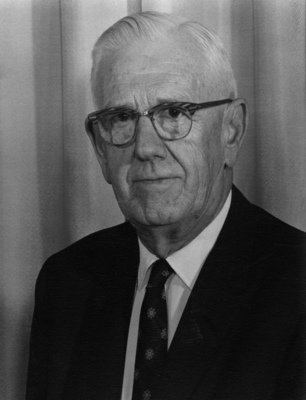 Charles E. Crossland was born on December 18, 1894, in Watertown, Massachusetts, the son of Benjamin and Frances (Frye) Crossland. He graduated from Sanford High School in 1913 before completing his B.S. in Animal Husbandry from the University of Maine in 1917.

Upon his retirement in 1961, Crossland was awarded an honorary Doctor of Law degree from the University. The previous year, he joined the Board of the Pulp & Paper Foundation as Executive Secretary and Assistant Treasurer, serving in those roles until September 1966 when he became Director of Communications. He also served as a Trustee of the State Educational Television Association and Executive Director of the Memorial Union Building Fund.

In 1981, Crossland was honored when university trustees renamed the UMaine Alumni Center as the Crossland Alumni Center. Also active in community life as a member of the Church of Universal Fellowship of Orono and as a 33rd Degree Mason. Crossland died at the age of 95 in Bangor, Maine on July 10, 1990.