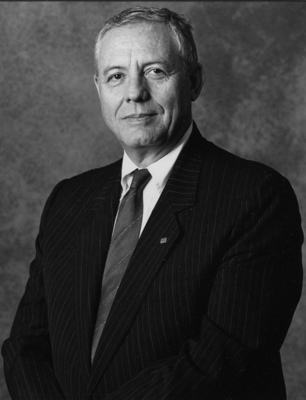 David A. Bossen was born on January 9, 1927 in Clinton, Iowa. He earned a B.S. in Industrial Management at Massachusetts Institute of Technology in 1951 after serving in the United States Marine Corps from 1945-1946.

Bossen’s industrial career began with Industrial Nucleonics Corporation in Columbus, Ohio, where he become Vice President, General Manager, and Chief Operating Officer. In 1967, Bossen relocated to California where in 1968 he founded one of Silicon Valley’s first technology companies, Measurex, an Industrial Automated Process Control System. He held several patents in the field of control systems. In 1997, Bossen sold Measurex to Honeywell Industries, but continued as CEO and Chair of the Board. Upon his retirement in 2000, he was named Chair Emeritus.

Bossen served as a member of the Maine Pulp and Paper Foundation Board of Directors. He established the Bossen Family Scholarship Fund and donated a Measurex, Vision 2002 Computer Integrated Manufacturing system to control the University's pilot paper machine. David Bossen died April 21, 2015.