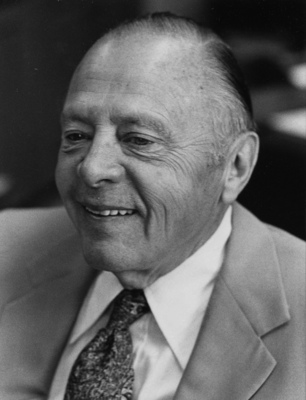 Curtis M. Hutchins, a Boston native, was born in April, 1907. After graduating from Williams College in 1928, Hutchins trained as a Forester at the University of Maine, receiving his Master’s degree. He was awarded an honorary Master’s of Science degree from Colby College in 1949 and an honorary Doctor of Law degree from UMaine in 1951.

Beginning in 1935, Hutchins took over management of his family’s business, Dead River, Co. which then owned thousands of acres of Maine forest lands. During World War II, he served as a lieutenant J.G. with the U.S. Naval Reserve as well as the Chair of the Pulp and Paper Division of the War Production Board.

Following the war, Hutchins diversified Dead River, Co., expanding into oil distribution and recreational land development. From 1948 until 1957, he served as President of the Bangor and Aroostook Railroad and President of St. Croix Paper Company from 1959 to 1963. He served on the Board of Directors for Scott Paper Company as well as several other corporations.

Hutchins was also active as a member of the Maine State Legislature, Bangor City Council and served as a member of the Maine Environmental Improvement Commission. He also served on the boards of numerous non-profit organizations. He was active with the University of Maine Pulp and Paper Foundation serving as a Director, Vice President, Secretary, and as a committee chair. Hutchins died in a Bangor Hospital after a brief illness in September 1985.