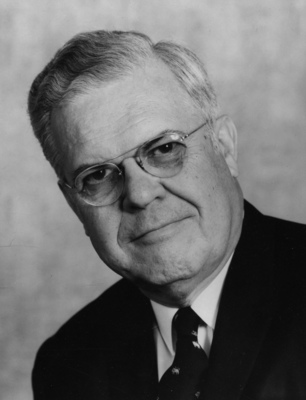 William H. Palm received his Bachelor’s degree in Chemical Engineering at the University of Toronto. He began his career in manufacturing and technical control and later joined Consolidated Dyestuff Corporation in the sales area.

Palm began his management career in 1937, joining Brampton Paper Company first as sales manager and then assistant general manager. In 1956 he joined Hinde & Dauch Company, a subsidiary of Westvaco, becoming its president. Following the sale of Hinde & Dauch to St. Lawrence Corporation and its latter merger to form DOMTAR, he rejoined Westvaco serving as its executive vice president until his retirement in 1976.

Palm became active in the University of Maine Pulp and Paper Foundation in 1969 as Chair as the Membership Committee. He was elected Vice President in 1971 and later became President and a member of the Board. In 1983, Palm served as the chair of the UMaine Jenness Hall Expansion Fund Raising Committee.