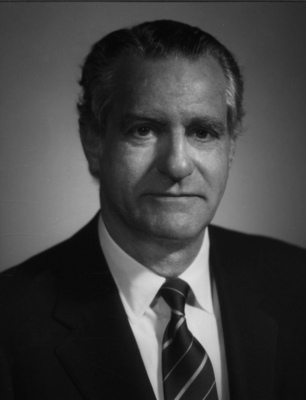 Ira D. Wallach was born in New York City, New York, on June 3, 1909. He earned bachelor’s and law degrees from Columbia University in 1929 and 1931. He began his professional career practicing law in the New York law firm, Kutch, Meyer, and Burton. He married Miriam Gottesman, in 1938 and continued to practice law until enlisting to serve as a lieutenant in the U.S. Navy during World War II.

Following the war, in 1946, Wallach joined his wife’s family company, Gottesman & Company, specializing in the sale of raw materials for papermaking. He assumed positions of increasing responsibility until becoming Executive Vice President from 1952-1956, President from 1956-1974 and ultimately becoming Chair and Chief Executive Officer. In 1973, Wallach was appointed director of Canadian Cellulose Co., Ltd. From 1947 until 1958, Wallach served as director of the Eastern Corporation in Bangor, Maine.

An outspoken opponent of the Vietnam War and the Nixon administration, Wallach’s name appeared among those listed in a White House memorandum listing Nixon’s personal list of targeted “political opponents.” In 1975, he established the Ira D. Wallach Professorship of World Order Studies at the School of International Affairs, Columbia University. In 1981, Wallach with John Edwin Morz, co-founded the Institute for East-West Security Studies, now the East-West Institute. In 1983, the Wallach couple presented a gift of $3.5 million to establish the Miriam and Ira D. Wallach Fine Arts Center at Columbia University and the Miriam G. and Ira D. Wallach Foundation supported various non-profit organizations impacting social issues including education, poverty, and medicine until 2013.