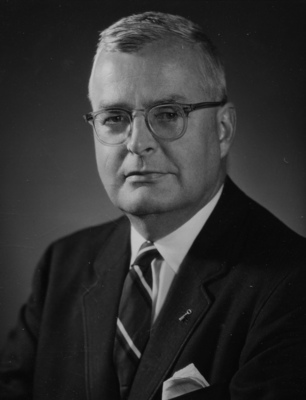 Eugene H. Clapp, II was born on September 22, 1913, in Brookline, Massachusetts, the son of George A. and Sarah Lillian Clapp. He graduated from Lafayette University in 1936 with a B.S. degree.

Clapp’s industrial career began with Penobscot Chemical Fibre Company as its Treasurer in 1937. He enlisted for service in World War II in 1942 and served in the Office of Strategic Services in China until being discharged in 1945. In 1946, Clapp was named President of Penobscot Chemical Fibre. In 1960, he became the Firm's Chairman, a post he held until 1967.

Clapp also served as President of Penobscot Capital Investment Company and as Chair of the Board for Tileston & Hollingsworth Company of Hyde Park, Massachusetts and the New Jersey Rubber Co. of Taunton, Massachusetts. He served on the boards of numerous corporate and philanthropic organizations.

Clapp served as a Director of the UMaine Pulp and Paper Foundation starting in 1953 during which time he served as Chair of the Nominating and the Membership Committees. Clapp also served the Foundation in the role of Treasurer and Chair of the Finance Committee.