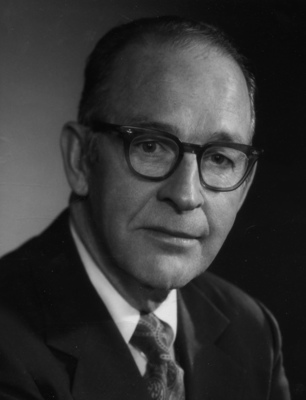 Henry W. Fales was born in Thomaston, Maine on January 28, 1913. He graduated from Thomaston High School in 1931, and from the University of Maine in 1935 with a B.S. in Mechanical Engineering, Fales continued his studies at the Wharton School, University of Pennsylvania.

Fales’ industrial career began at Scott Paper Co., initially in Chester, Pennsylvania then in management positions at strategic mills in South Glen Falls and Fort Edward, New York during World War II. He was subsequently named Vice President of operations at the St. Croix Paper Co. in Woodland, Maine. His 14-year career with St. Croix culminated with the building of a new paper machine and conversion of the mill to newsprint and xerographic paper production in 1951.

Fales went on to become the Vice President and General Manager of the Continental Paper Co. in Ridgefield Park, New Jersey before joining the St. Regis Paper Co. in 1967 as Resident Manager of the Pensacola, Florida mill. Four years later, Fales moved the St. Regis Paper Co. corporate headquarters to New York City where he served as Vice President and General Manager of the Printing and Packaging Papers Division and the Kraft Division prior to his retirement in 1978. Following his retirement, Fales established a global consulting firm.

Fales co-founded the University of Maine Pulp & Paper Foundation in 1950, later serving as the Secretary, Vice President, Chair, and as a member of the board. Pre-deceased by his brother, Otis, Fales and his wife, Dorothy Mae (Booth) Fales, established Otis G. Fales Scholarship with the Foundation in 1970. Fails was also a member of the Canadian Pulp & Paper Association (CPPA) Technical Section and the Paper Industry Management Association (PIMA). In 1981, he was named Executive of the Year by PIMA. Fales died on June 3, 2009 in Juno Beach, Florida.