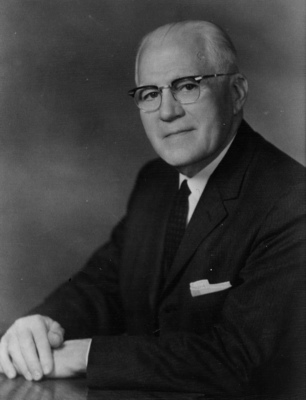 J. (John) Larcom Ober was born to John A, Ober and Janet A. Cohoon in Beverly, Massachusetts in August 1890. He graduated from the University of Maine with a B.S. in Electrical Engineering in 1913. He worked as an engineer and executive with Stone and Webster Company of Boston for 19 years. In 1933, he began work as an executive at Scott Paper Company, retiring from that company in 1955.

Ober served as the first president of the UMaine Pulp & Paper Foundation. In 1950, he announced the group’s formation at a meeting of UMaine alumni working in the pulp and paper industry, as well as allied fields and served as president until 1961 when he was named Honorary Chair of the Foundation’s Board.