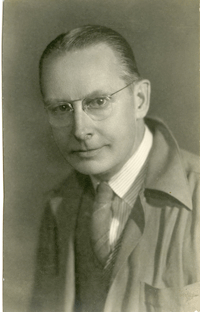 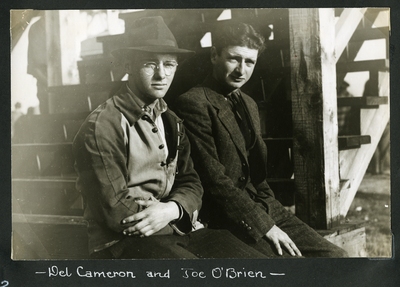 Black and white photograph of futher Hall of Fame driver-trainers (left to right) Del Cameron (age 18) and Joe O'Brien (age 21) at the Cumberland Fair Grounds during the November 1938 Over-Coat Meeting, West Cumberland, Maine. Adelbert 'Del' Cameron, 1920-1979, was born in Harvard, Massachusetts and would go on to win 1,358 races and more than $4.7 million in purses during his career. Cameron was inducted into the Harness Racing Museum Hall of Fame in 1975. Joe O'Brien, 1917-1984, was born on Prince Edward Island, Canada. During his 45-year career as a trainer-driver, O'Brien won over 4,200 races, claiming nearly every major stakes race and over $20 million in purses. O'Brien, elected to the Harness Racing Museum Hall of Fame in 1970, once held the record for the most trotters and pacers driven to their first 2:00 miles.